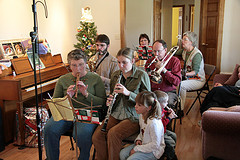 And the Word became Flesh. In the beginning God the Father spoke. Begotten from His lips was the Word that made all things. God and Word are separate and yet the Lord your God is one (Deut 6:4). Proceeding from both Father and Word is the Spirit. Together three persons and one God. Christmas is the celebration of the birth of the Word. The same Word that spoke into the darkness and made light is the Light of men.

Some think this doctrine is just empty speculation or spiritual mumbo-jumbo. They say, “Jesus is just another guy with nice things to say. Whether He was God, is God, or became God-like is irrelevant. What’s important is what He said.” Nothing could be more damaging to the faith. If Jesus is not God then just another nice guy died 2,000 years ago as nice guys have died since the dawn of time.

What was confessed by Moses and repeated throughout the Scriptures is now utterly revealed by the Evangelist John: “The same Word of which I declared that it was in the beginning, through which all things were made, which was the Life and Light of man, became flesh.” As we confess and do not deny but confess each week: “Who was incarnate by the Holy Spirit of the Virgin Mary and was made man.” Just as John lays this doctrine of as the foundation for his Gospel, so too we lay the incarnation (enfleshment) of Jesus at the center of our faith.

You’ll notice that during the confession of the Creed it is the practice of our churches to either bow or kneel at those words. Our bodies confess what we believe. Christmas is not simply the birthday of a 1st century Jew. It is the day of the birth of the Son of God. It is the festival of the Incarnation.

“The most precious treasure and the strongest consolation we Christians have is this: that the Word, the true and natural Son of God, became man, with flesh and blood like that of any other human; that He became incarnate for our sakes in order that we might enter into great glory, that our flesh and blood, skin and hair, hands and feet, stomach and back might reside in heaven as God does, and in order that we might boldly defy the devil and whatever else assails us.” (Luther, AE22:110)

“The same Word, which became man, Mary suckled and carried in her arms as any other mother does her child. He came to men, lived and dwelt among them.” (Luther, AE22:112) He did not avoid humanity. We are not above His social status. He dwelt among us, indeed ate and drank with not only saints but sinners and tax collectors. Jesus is not some ghost or figment of the Christian imagination. He was seen, heard, touched, and followed.

Jesus became a natural man like any other man of flesh and blood. He had eyes, ears, mouth, nose, chest, stomach, hands, and feet, just as you and I do. His mother nursed Him as any other child is nursed. He acted as any other human does. He was born as a true man from the Virgin Mary; the one difference, however, was that He was not born in sin as we are, that “He committed no sin, and no guile was found on His lips.” (1 Peter 2:22)

John could have said “The Word became man” but instead he said “flesh.” This is intentional. Jesus didn’t become some kind of Superman, showing us all that we could be. No, Christ took on human nature to show us its weakness and mortality. In His death we will see in Jesus’ flesh the terrible judgment of God because of the sins of humanity. All the anger and wrath of God was not justly given to us but rather heaped upon God’s own son as He suffered and died. Christ redeemed us from the curse of the law by becoming a curse for us—for it is written, “Cursed is everyone who is hanged on a tree” (Galatians 3:13)

The sinless Lamb of God, born of Mary, would give His life as ransom for us. Thus, when the Evangelist says that we beheld His glory, he’s not referring to Christ’s spectacular appearance or miracles. We beheld His glory when He died our death and arose from the dead by His own divine power. For this reason the Father loves me, because I lay down my life that I may take it up again. (John 10:17).

That’s what Christmas is all about. God made flesh to redeem our flesh. We have seen redemption and receive it. Jesus said: “Where I am, there you shall be also” (John 14:3) and “Because I live, you will live also” (John 14:19). Thus, for all who have received Him (lowly child and crucified God), who have believed in His name, He gave the right to be children of God. We are sons of grace and mercy though not of our nature. God is gracious and merciful by nature and we receive it in the Christ-child.

No items, feed is empty.