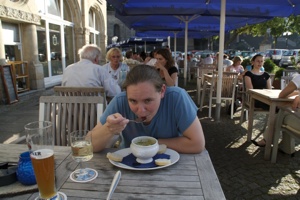 For Creedal Christians, we unanimously believe that Christ’s session to the right of the Father is not secondary, ancillary,or a tangental story. All three universal and ecumenical creeds record hold the Ascension as a essential teaching, that “whoever desires to be saved, must above all, hold the catholic faith.”

Unlike Christ’s death and resurrection—recorded with intimate detail by all four Evangelists—the Ascension is a brief footnote in Mark and a a narrative transition in Luke. One has to wonder why this festival holds such a high place in the liturgical life of the church, drawing the Christ’s flock from their typical weeknight activities.

Actually, as I look about this sanctuary, doing a brief headcount, I don’t think we’re anything close to the aggregate number of believers that is the Hammond Circuit of the Indiana District of the Missouri Synod. If we had to wager a guess, it’s probably the same reason why I struggled with this sermon. I don’t recall attending any Ascension service until after college. I don’t recall hearing about Christ’s ascension in catechism. Frankly, I don’t think I could have articulated the joy of the Ascension until recently.

To test my theory, I spent the last few weeks polling the members of Grace in Dyer, friends, and family. The honest truth is I’m not the only one. With the exception of one dear member who is unable to join us this evening, every single person struggled to articulate the reason, the benefit, or the joy of the session of Christ to the Father’s right hand.

The reason for the confusion is simple. The problem with the Ascension for many is a problem with Christ. Scorners mock the Ascension, saying, “your God has left you, carried away into the heavens, whatever that means…” Others consider our body, including Christ’s, a prison which is finally transcended by our reception into heaven. Others want a Christ whose Spirit is his highest expression.

Even if you believe that Christ bodily ascended, confessing the Creed each week, how is that doctrine a comfort? As one of Christ’s disciples, do you have a Jesus who has disappeared to heaven? Has he left us to rejoin his Father, leaving behind breadcrumbs for us to follow him up to heaven?

Frankly, many fellow Christians, maybe even most, consider Christ as distant and absent. He has left us behind, maybe not quite as orphans but with only the Paraclete. Perhaps through ecstatic worship or heartfelt prayer, we might, just maybe, be able to spiritually ascend into the heavens to be with Christ. The logic goes something like this: If Christ bodily ascended, then he is not and cannot be present with us today, at least not in the way he was with his disciples or in an even better way. His body is relegated to the heavenly throne and at best, only his Spirit can join with us.

This is a rejection of the teaching of Christ about his own person. This is a outright denial of the Athanasian Creed. As a consequence, the Ascension of Christ is not a source of great joy and worship for many because many have a false picture of Christ. Their Lord and Savior is absent in all but Spirit, watching over them from above.

The truth is this: At our Lord’s incarnation, the Son of God joined himself forever to humanity. God was made man. Conceived of the Holy Spirit and born of the Virgin Mary, the Son of God is true divinity and true humanity. This is a great act of humility, God begetting the son in human flesh and blood.

This truth—the incarnation—is essential to confessing the Ascension in all its blessing. From his birth, to his ministry, to his death, his resurrection, and to his post-resurrection appearances, we see a Jesus whose divinity is shrouded in humility. The godhead is humbled in the flesh.

Brief glimpses of divinity testify to his Sonship. Miracles attest to his origin. He turns water into wine, bread and fish are multiplied, diseases are healed, and the dead are raised. These are flashes of divinity. Yet, through it all, Christ remains man, whose divine attributes are humbled under his humanity.

Christ eats and drinks. He sleeps and walks. He appears to one at a time. He touches the sick and the infirm to make them better. He speaks a very human voice to cast of the demons and to declare forgiveness. He tires and mourns. He sweats droplets of blood. He suffers in his body the scourging. He fails under the load of the cross. He gasps his dying breath, while in agony and shame upon the cross. This is very human stuff.

After his resurrection, he does not cast off his humanity. For the Spirit of the Father and the Son is forever joined to the boy born of Mary. From the incarnation on, Jesus is known as God and man. As the Athanasian Creed—the Creed of Trinity Sunday—places on our lips: “it is the right faith that we believe and confess that our Lord Jesus Christ, the Son of God is at the same time both God and man. He is God, begotten from the substance of the Father before all ages; and he is man, born from the substance of His mother in this age.” This unity of God and man is “not by the conversion of the divinity into flesh but by the assumption of the humanity into God.”

After his resurrection, the work of Christ is not complete. His resurrection of the dead, his passing through closed doors, his seeming coincident appearances to to many, even to 500 in Jerusalem, are nothing compared to what is to come. The fullness of God is not yet exercised by him. For example, our Lord is not yet present everywhere Christians are gathered. The salvation of the world, purchased and won through his blood, has not been given to ends of the earth.

This work is begun at his Ascension. The Ascension of Jesus is not his disappearance but rather the transition into the age of the church. Most incredibly, it is the assumption of our humanity into God. That work was begun in the incarnation and now reaches its fulfillment in the flesh and blood of Christ and his bride, the church.

The Ascension is one of the great milestones or transitions in the history of the world. Its counterpart is the fall of Adam into bondage to sin, death, and the devil. In that event, the first Adam fell from his position of dominion and authority, subject only to God. Through his rejection of God and His will, Adam took himself to be lord. He subjected himself to himself to Satan’s lies. And he suffers the curse of death.

In the Ascension, Jesus reverses the fall and instead rises above the muck and gloom of our fleshy wickedness. In perfect life, he overcame the temptation to sin. In his death, he destroyed death, and in his resurrection, he brought life and immortality to light.  Now, in his Ascension, he returns humanity to its rightful place of godly dominion.

The first Adam fell into shame and disgrace. Man was corrupted into posterity, cursed to work for food, to struggle with temptation, and to fear death. Now, the second Adam, Jesus Christ, true God and true Man, has lifted man to freedom into eternity. We receive food and all good things, even without our asking, for the sake of Christ. We are freed from temptation, to love and serve him forever. Death’s sting is removed and eternal life is ours.

We are his saints. The eyes of our hearts are enlightened. We know the the hope to which he has called us, the riches of his glorious inheritance in the saints. We know what is the immeasurable greatness of his power toward us who believe. We know, because we know this Christ, the God-man, and we are flesh of his flesh, and bone of his bone. He is the head of this body, the church. He is not absent nor distant. For we are in him and he in us. We are joined to him in the washing of rebirth. We are refreshed in him in the eating of his flesh and the drinking of his blood. We are forgiven at the sound of his voice. We are led in the path of righteousness by his Word.

These holy mysteries are divine, to be sure. And they are very human, too. For as Christ ascended into the heavens in his body, so we have and will part into the heavens in the body. The saints, joined to Christ, dwell with him in the heavenly places, where the fullness of him fills all in all.

The Father of Glory did this “according to the working of his great might that he worked in Christ when he raised him from the dead and seated him at his right hand in the heavenly places, far above all rule and authority and power and dominion, and above every name that is named, not only in this age but also in the one to come.”From the right hand of the Father, he has begun his reign, inaugurating the kingdom of grace.   The reign of the wicked trifecta has ended. Our Lord “must reign until he has put all his enemies under his feet.”

Just as our Lord was taken into the cloud, so he will return on the cloud. And while they were gazing into heaven as he went, behold, two men stood by them in white robes, and said, “Men of Galilee, why do you stand looking into heaven? This Jesus, who was taken up from you into heaven, will come in the same way as you saw him go into heaven.” Or as we confess every Sunday and even daily, “from thence He will come to judge the quick and dead.”

This judgment has already declared. For all you, who are in Christ, receive Christ. Not just the Spirit of Christ but the flesh of Christ. You who were once dead in your sin, now are made alive in him to love God and love neighbor. You who were once in bondage to mistress Sin and her brothel-keeper Satan, are freed to obedience and righteousness and their Lord, our Lord. Even death’s verdict has been silenced and eternal life is given to you.

The final victory was accomplished in Christ’s death and resurrection. The kingdom begins in the Ascension. The kingdom began its extension into the whole world at Pentecost. To this day, Christ rules in his body throughout the church. Tonight we receive again the firstfruits of the resurrection, our Lord himself. We taste and see that our Ascended Lord is good. Receive your Lord and continue in him, partakers of his ascended flesh and thus also, his divine nature. Amen