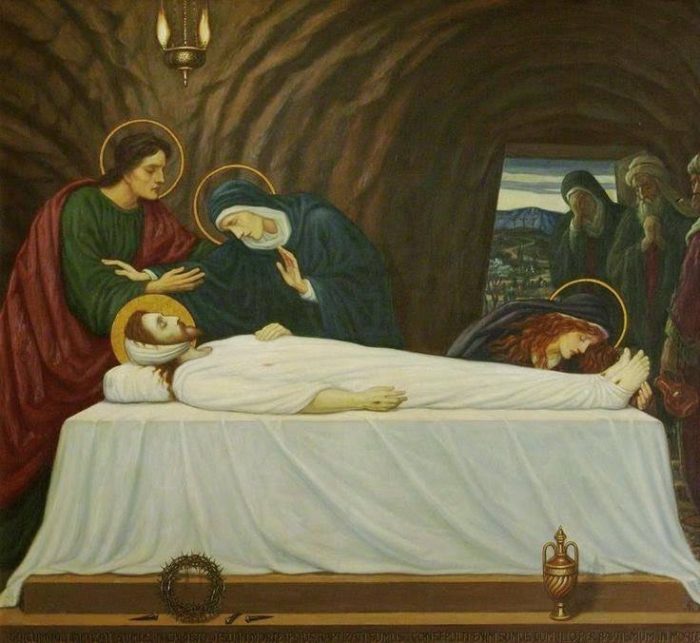 Last week Friday I found out that a friend’s fifteen year old son had died accidentally. I was on my way to Fort Wayne to do a recording. Having a sixteen year old son myself, it hit me hard. I had to shut off the podcasts and the music. I needed the silence. The tragedy of it loomed over Palm Sunday and through Levi’s visitation on Holy Tuesday and his funeral and committal on Holy Wednesday. This horrible death came in the midst of our annual celebration of our Lord’s Passion. So, all—Levi’s family, friends, and fellow Christians—had the benefit and comfort of hearing Pr. Hertel preach that our Lord died for our sin, defeated the Devil for us, and destroyed our death.

It is true that when one member of the body of Christ, the church, suffers that we all suffer. The words of the Litany rang in my ears all through each morning Matins service this week. “From all sin, from all error, from all evil;  From the crafts and assaults of the devil; from sudden and evil death… Good Lord, deliver us.” There’s no answer as to why, only that Jesus died for Levi, forgave Levi, and promised him the resurrection of the body and the eternal inheritance of Heaven in Holy Baptism. Now Levi rests in the Lord’s peace, awaiting the last day and the Lord’s triumphant trumpet-like call awake!

Another petition of the Litany was personal. We prayed, “To grant all women with child, and all mothers with infant children, increasing happiness in their blessings; to defend all orphans and widows and provide for them;  To strengthen and keep all sick persons and young children; to free those in bondage; and to have mercy on us all…We implore You to hear us, good Lord.” I couldn’t help but think of my own children and how precious and fragile their life is. I especially considered how this petition applied to the young child in Anne’s womb.

But perhaps we shouldn’t have changed the old words of the Litany. This petition used to go like this: “To preserve all women in the perils of childbirth.” I did not know that our child had already died. Anne started spotting later on Wednesday evening and by Thursday afternoon’s appointment it was clear that we were suffering a miscarriage. This was a first for us. I was shocked. We’d had eight uncomplicated pregnancies so why would I expect differently? I had some emotions then. But the reality hit me later.

While I was filling some coffee orders, our six year old daughter Leah asked me, “Daddy, why did the baby have to die?” She’s very matter-of-fact. She followed with, “I wanted a baby sister. You need to get pregnant again right away.” We love our Leah. But her statement hit the nerve. Our child was dead.

I do know this: that my own sympathetic grief with the family of Levi Mueller early in the week later brought the reality of what happened to us into razor-sharp focus. Just like fifteen-year-old Levi, now we learned our child was dead. Our joy at the blessing of conception was now turned to the sorrow of the death. There’s no other way to say it.

So, that’s what I prayed at our Good Friday Tenebrae service. “Almighty God, gracious Father, Your ways are often beyond our understanding. In Your hidden wisdom the hopes of Anne and Christopher have been turned from joy to sadness. In your mercy help them to accept Your good and gracious will. Comfort them in their hour of sorrow with You life-giving Word for the sake of Jesus Christ… Amen.”

Granted, it took me a while to make it through. The full weight of what is nothing less than a death of our child came crashing over my defensive walls. I thought my weeping was over after the little interaction with Leah. It wasn’t and it isn’t. There is a time for weeping and sorrow and it is now. But, as we hear at every funeral from St. Paul, “We do not grieve as those who have no hope.”

We believe and confess that all life is a gift from God, from womb until the tomb. And more so, we believe every life is one for whom Jesus died. Jesus did not die only for those who come of age, who accept Him, and who live a full and rich life. He died for those who slandered Him, mocked Him, beat Him, condemned Him, and crucified Him. He even died for the murder crucified next to Him. If he died for those sinners, then He died for our littlest, too.

Remember the confession of David, “In sin did my mother conceive me.” The Scriptures are clear: even from conception we are sinners. We are not sinners simply because we sin. We are sinners because we are flesh and blood. It is the condition we receive as our unholy inheritance from our parents spanning back to the first sin of the Garden. Everyone from conception needs redemption. Thanks be to God that the one whom God knits together in their mother’s womb is also the one for whom Christ died to save. He died to save our child, Levi, and everyone.

You see, the joy of Easter is not that He saves us from sorrow, worry, and despair. The joy is that He saves us in the midst of it. While we’re neck-deep in the horror of this life, that’s where Jesus meets us. That’s probably where many of you are this morning, right in the thick of it with us. Dad had a major heart attack. Mom is in memory care. Husband’s physical condition is deteriorating rapidly. Friend has cancer and its terminal. The joy of the Resurrection isn’t a message apart from this life. It’s the answer to it.

That’s where Jesus met those three women at the tomb. They had witnessed the horrific death of their brother and rabbi. And in the case of one, it was the death of her son. What is more terrifying than to have your child die? I know it now. But did she remember the promise that the Son of Man must die and on the third day rise?

No, she didn’t. Nobody believed, despite the motion pictures. The mother of Jesus along with the other Marys came to finish the preparation of the body for its year-long rest in the tomb before the final internment of the bones in the family ossuary. She considered it his ignominious end. Even when they saw the angel, they were alarmed. When the angel spoke good news, they fled traumatized and out-of-their-minds. They said nothing to anyone, because they were absolutely seized with fear.

Look. Anne and I aren’t alone. You’re not alone either. The fear, terror, horror, and sadness of this life is real. And Easter doesn’t take us out of it. Instead, Christ meets us today in the deep, dark pit of this life. He shines the light of His love into our sin-darkened hearts. He promises resurrection to us our those we love who died in faith. As Luther would have us sing, “In the midst of death we live,” not “in the midst of life we die.” That’s what today is about. Life proclaimed in the midst of death; dead, dry bones receiving sinews, flesh, and breath. God breathing on us who are dead to give us His resurrection and life.

The peace of God, which surpasses all understanding, guard your hearts and minds through Christ Jesus. Amen.