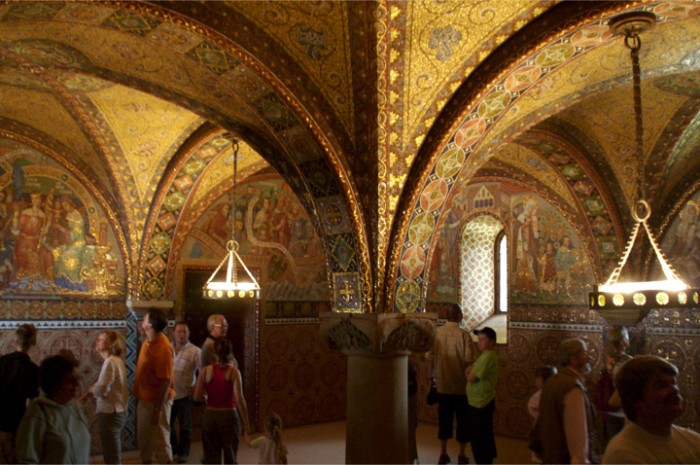 Handling God’s Word is like playing with dynamite. It’s bound to blow up in your face. This scares many from even trying to read it. They’re not sure what will happen. Maybe they’ll cut the wrong wire? Maybe they’ll be too nervous and drop it? Maybe it’ll set off a chain reaction that will destroy everything they hold precious?

What keeps you from cracking open the Scriptures once and a while? What keeps you away from church, the Divine Service, and the study of God’s Word? Are you scared what God has to say? Are you worried you might not get it? Are you intimidated by the sheer volume of speech contained in those sixty-six volumes? Or is it that your worried God might actually have something to say to you? I mean something specific for just you?

It happens and it is good. The Word devastates the proud and lifts up the beaten. It’s awesome stuff and intimidating at the same time. Even the preacher has difficulty writing a sermon. When he reads the appointed texts for the day and begins to handle the Word of Truth, he’s likely to get burned. It’s dangerous business. This preacher is just as vulnerable to the Word’s work as you are.

The Book of Deuteronomy is such a book. It records Moses’ sermon to the people shortly before they are to finally enter into the Promised Land. He recounts for them again their history and the commandments of God. Deutero means second and nomos means Law. Literally Deuteronomy is the the Law on repeat. He tells them again of their deliverance from Egypt, their refusal to enter the land God swore to give them, their creation of the Golden calf idol, and finally their wilderness wanderings. Now Moses preaches to them again what God delivered on tablets of stone, for liturgy, and for the neighbor.

It’s heavy duty stuff. God is not chaotic but precise. He commands the place of worship, the manner of worship, calendar, and tithes. And then God continues to command how to love your neighbor. He speaks of warfare, of the courts, of inheritance, of uncleanness, and providing for the needy. Attached to this commands are curses and blessings. Do this and you will live. Fail to do this and you are cursed.

It’s the commands of God that people fear most. No one likes being told what to do. And if the what is also true then we are cursed by guilt when we don’t do it. That’s probably why some keep their Bibles closed.  It’s easier to ignore God than take Him seriously. No one liked Moses. His people begged the Lord at Horeb on the day of assembly to get rid of him. It’s not that they hated Moses per se. They hated the Word that came from His mouth. They said, “Let me not hear again the voice of the LORD my God or see this great fire any more, lest I die.”

Avoiding God in His Word is nothing new. The people cowered in fear at the thought of God even opening His mouth again. But beginning with Moses and continuing through John the Baptist, the prophets kept coming at the people with this Word. They spoke only as they were given to speak for they were men under orders. In the name of the Lord they spoke. The people hated them for it. The word they spoke was harsh. It was the severe taskmaster. God was preserving them until they would go into the land they would inherit.

Moses was a minister of the Law, revealing sin and death. All throughout his giving of the Law in Deuteronomy Moses reminds the people that they have not kept the Law. They whined about the Amelikites. They grew impatient with God and made a idol golden calf. They complained about the food. Because of these transgressions, God gives the Law via Moses. He makes demands without the ability to meet them. He makes everyone guilty of death and subject to punishment.

Moses also reminds them that they are going into the promised land as a gift. It is given not out of righteousness or uprightness on their part but so that the LORD would confirm the word that He swore to our fathers, to Abraham, to Isaac, and to Jacob (Deut 9:4-6). The LORD set his heart in love on [our] fathers. (Detu 10:15). This love is most evident in the promise of today’s reading. This new prophet will teach something other than Moses. He will not come bearing sin, wrath, and death. No, this prophet gives righteousness, grace, and life.

In the midst of Moses’s proclamation of commands, he gives this curious prophecy. The LORD your God will raise up for you a prophet like me from among you, from your brothers—it is to him you shall listen. This prophet is not like Moses, speaking from the fire on the mountain. The fear of the people of this sort of message is just. TheLORD said to Moses “They are right in what they have spoken.” This prophet will not come in the thunder of Moses, the laments of Jeremiah, or the “you brood of vipers!” of John the Baptist. He will come like Moses but will be given new words. This Word will be the final Word. It is to Him you shall listen and not Moses.

Moses had laid down the Law for priesthood, kingdom, and worship of God. And now he tells us of another who will come bearing a new priesthood (you!), another kingdom (the church!), another worship of God (the liturgy of the Sacrament), and another Word (the Gospel!) Everything of Moses and the Law is assumed into Christ and fulfilled by Him. Moses is foretelling the end of the prophets and the beginning of the Christ’s church. We will celebrate again His gracious arrival Monday night.

From Moses on, the preaching of the Holy Ten Commands is necessary. It remains God’s Word. By the Law all are humbled, devastated. The dynamite goes off. But the new Word of the infant Christ—the Gospel—raises up. It exalts the lowly. It gives life to the dead. This new Word put in the new prophet’s mouth is a good gift. Both the words spoken by Moses and Jesus are the Word of God. But the fruit of the former is only death and the latter is only life. Jesus demands nothing but He gives to you precisely what Moses demanded. Christ is the greatest prophet and His Word of the Gospel always wins against its opponent—the Law.

What you will find—if you open your Scriptures and read—is that a new Word of promise is echoed by Moses until John the Baptist. This not new to God but His mercy was from before the world began. This Word of Christ is also powerful, dynamite. It is explosive good news! In Jesus the hope of the nations is fulfilled. Jesus frees and consoles those who are frightened and broken.

This news must be known. Jesus must be heard. Our salvation begins not with any work of ours but with the hearing of the Word of life. The Law comes first to destroy the old Adam, reveal sin, and teach us we are incapable of saving ourselves. ““The Law brings wrath,” (Romans 4:15) and brings it so completely that the people not only do not do the Law but will not even hear it, for it kills them.” (Luther)

Jesus is the Prophet long foretold. When the Holy Spirit is received by faith, then we are justified by Him without any work of our own, only by the gift of God. We experience peace and a good conscience toward God (Rom. 5:1) and joyfully and confidently we cry: “Abba, Father” (Rom. 8:15). Now there is no more fear or flight from the face of the wrath of God; In Jesus there is childlike access to God through grace (Rom. 5:2–3).

The Word of God can scare us when it holds up the mirror to our sinful flesh. But this Word is overcome by the greater Word of Jesus. Times of refreshing are here. The prophets of old are silenced when the greatest Prophet comes. Jesus is the fulfillment of the Word. He received the curses for all our transgressions. By Him we receive every blessing God promised. That’s why Christmas is so special. In the precious Christ child nestled in Mary’s arms is the end of the Law and freedom in faith.  Powerful good news! Thanks be to God.