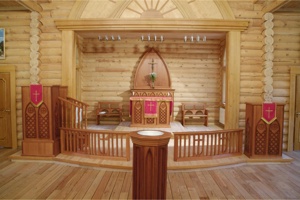 Alleluia! Christ is risen! He is risen indeed. Alleluia!

Easter triumph, Easter joy! Where is our joy? It is in Christ our Lord. His death slayed death. Because he dies, death no longer has dominion over us. We are free to live without fear of judgment or of our final day. For no Christian will ever die. No Christian can die. We will all but sleep and in the twinkling of an eye be resurrected to join the whole heavenly host, singing in triumph around the throne and the lamb forever and without end. Amen.

There is yet a problem. We boldly confess that Christ rose from the dead, destroying the grave for the faithful forever. But did it really happen? Can we be sure?

St. Paul knew that this would be a problem for some. Christ’s rising would always be a stumbling block to some. He said: If Christ has not been raised, then our preaching is in vain and your faith in vain.

Undoubtedly, each year, another unbeliever steps forward with the bold assertion that Jesus did not rise from the dead. They say that anyone dead at point A surely cannot be alive at point B. Dead men don’t walk.

For all intensive purposes, they are right. I suppose some might suggest that resuscitation with paddles and CPR is a rising of sorts. By try doing that to a corpse that has been lying lifeless in a tomb since Friday. Today, there’s no reviving the flesh that has long since stopped breathing, whose heart has long stopped beating, and whose brain’s neurons no longer fire.

So it most definitely was with Jesus. Roman soldiers were skilled at their craft. They could tell when someone was faking death. They and their instrument of torture, of shame, of agony, and of execution knew how to kill. Like a skilled marksman or a trained soldier, they new exactly how to kill and when their mark was dead a doornail.

St. John is aware that there may be unreasonable doubt about the efficiency of this death squad. He bore witness on Friday to their effectiveness. He said:

31 Therefore, because it was the Preparation Day, that the bodies should not remain on the cross on the Sabbath (for that Sabbath was a high day), the Jews asked Pilate that their legs might be broken, and that they might be taken away. 32 Then the soldiers came and broke the legs of the first and of the other who was crucified with Him. 33 But when they came to Jesus and saw that He was already dead, they did not break His legs. 34 But one of the soldiers pierced His side with a spear, and immediately blood and water came out. 35 And he who has seen has testified, and his testimony is true; and he knows that he is telling the truth, so that you may believe. 36 For these things were done that the Scripture should be fulfilled, “Not one of His bones shall be broken.” 37 And again another Scripture says, “They shall look on Him whom they pierced.”

Yet, such a testimony from John is not sufficient. Just because the Romans seem to take care of business, what about the Jews. Maybe they were negligent in assuring Jesus was dead? Just last week we heard the testimony of the Evangelist Matthew speak to this very point:

62 On the next day, which followed the Day of Preparation, the chief priests and Pharisees gathered together to Pilate, 63 saying, “Sir, we remember, while He was still alive, how that deceiver said, ‘After three days I will rise.’ 64 Therefore command that the tomb be made secure until the third day, lest His disciples come by night and steal Him away, and say to the people, ‘He has risen from the dead.’ So the last deception will be worse than the first.”

65 Pilate said to them, “You have a guard; go your way, make it as secure as you know how.” 66 So they went and made the tomb secure, sealing the stone and setting the guard.

In fact, they were adamant that Jesus not ever be considered alive again. Even after hearing that Jesus was no longer in the tomb, they bribed the soldiers. Matthew reports:

11 Now while they were going, behold, some of the guard came into the city and reported to the chief priests all the things that had happened. 12 When they had assembled with the elders and consulted together, they gave a large sum of money to the soldiers, 13 saying, “Tell them, ‘His disciples came at night and stole Him away while we slept.’ 14 And if this comes to the governor’s ears, we will appease him and make you secure.” 15 So they took the money and did as they were instructed; and this saying is commonly reported among the Jews until this day.

Even after hearing the report of the Roman guard they appointed, those skilled soldiers had to be bribed to perpetuate the myth that Jesus had not risen. St. Matthew even acknowledges that the lies of Jews continued even to his day.

Even today many continue to be deceived by the same lies. Yet, without the resurrection of the dead, without Christ’s resurrection, our faith is in vain and we have no hope.

St. Paul said: And if Christ has not been raised, your faith is futile and you are still in your sins. Then those who have fallen asleep in Christ have perished. If in this life only we have hoped in Christ, we are of all people most to be pitied.

There is real consequence for the denial of the resurrection. Without Jesus alive, his sacrifice is in vain. If God the Father did not raise him up, then he did not deem our Lord’s death the full, complete, meritorious sacrifice necessary for your salvation. If Christ is not risen, then death is still your prison. But if Christ is indeed alive, then death is destroyed and life and immortality have been brought to light.

Not only St. Matthew but also St. Luke, St. Mark, and St. John are keenly aware of this fact. Throughout the Triduum we heard St. John repeatedly testify. He ends his Gospel with the imprimatur: This is the disciple who is bearing witness about these things, and who has written these things, and we know that his testimony is true.

All through the Gospels, the Evangelists riddle the narrative with eye-witness details. They are greatly concerned that their Scriptures be found trustworthy. Guided by the Spirit, they foresaw the barrier so many people have with Jesus, his resurrection, indeed with his death, his life, and most of all, his word. They are quick to find doubt in the first-person account of these closest disciples of our Lord.

No, as St. John says: Jesus did many other signs in the presence of the disciples, which are not written in this book; but these are written so that you may believe that Jesus is the Christ, the Son of God, and that by believing you may have life in his name.

An empty tomb wasn’t good enough. Seeing the linen cloths folded wasn’t enough. That’s not enough to understand the Scripture, that he must rise from the dead. But when he appears and says to Mary Magdalene: Mary. [Then] she turned and said to him in Aramaic, “Rabboni!” (which means Teacher). Mary knew him, recognized him, and testified he was risen. She ran and announced to the disciples, “I have seen the Lord!”

But in fact Christ has been raised from the dead, the firstfruits of those who have fallen asleep. For as by a man came death, by a man has come also the resurrection of the dead. For as in Adam all die, so also in Christ shall all be made alive.

There is no doubt that Christ was most definitely dead at point A. But there, too, is absolutely no doubt that he was alive at point B. Christ the firstfruits, then at his coming those who belong to Christ. Then comes the end, when he delivers the kingdom of God the Father after destroying every rule and ever authority and power. For he must reign until he has put all his enemies under his feet.

Alleluia! Christ is Risen! He is risen indeed. Alleluia!