The second day of the class is complete. As with yesterday, the interaction of theological ethics and the American and Russian students is fascinating. Our professor asked the class if there were discussions after the collapse of the USSR in regards to abortion. They said the Soviets legalized abortion in the 1950’s in reaction to the number of occurring underground. When the USSR fell, the persisted with the status quo. Its not off the radar map but there has not been a Christian ethic for over half a century nor the opportunity for change. One of the deaconesses helps operate a crisis pregnancy center but discussions are definitely not widespread. Contrast this to America where it is on the front burner in political bantering. 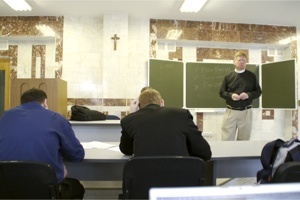 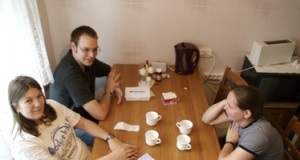 Anne got a good nights sleep but I’m still wrestling with the schedule. Its cold and rainy which doesn’t help my sinuses either. Maybe I’ll just have a late evening and be cranky tomorrow. We did have a nice dinner with a 100 ruble red wine, macaroni, sauce, frozen veggies, and bread. Very simple but very nice. We’re having the single guys over tomorrow for stir-fry.