The class is over. I love sitting in a chair for forty-five hours a week, two weeks in a row. I enjoyed the content of the “Theological Ethics” course immensely. Its implications permeate through the entirely of the Holy Ministry and the lives of the church’s people. We engaged many topics including creation, birth, marriage, and end-of-life. Prof. Pless laid significant groundwork for a Biblical and distinctly Lutheran theological ethic in the first week. In the second week we addressed specific topics operating within this theological ethic.

I learned to distinguish between a theological and social ethic but also when to apply each. To do so, we must operate within Luther’s understanding of the two kingdoms. When the subject at hand is within the left hand kingdom of the world, we use a social ethic. When in the right hand kingdom of the salvation, we use a social ethic. A proper understanding of Law and Gospel as well justification and sanctification are essential to properly determining the kingdom realm of the subject and the appropriate word of Law or Gospel to be applied. We have an ideal ethic presented in scripture, and then we have our sinner and saint duality. When the rubber meets the road, our ideal ethic bends and shifts under the weight of our sin. Hard choices are made in the kingdom of the left that are far from ideal. This includes a just war, removal of life support, or abortion of a tubal pregnancy. Its ugly business. Thank God we live under His grace and despite the cross-bearing of this world, we are saved by the death and resurrection of Jesus Christ.

We made many new friends and met old ones. We could visit with Gloria and Alla who both completed the deaconess program in Fort Wayne. We met many new people including VictorOne, VictorTwo, Vladimir, Olga, and Father Alexei. The bonds of unity under Christ are incredible. We’re separated by many thousands of miles. Yet, we can join in the Creed, the Lord’s Prayer, and our liturgical responses like “Thanks be to God!” I hope that our visit will help to foster continued unity of teaching and result some day in full fellowship between our churches.

The last days of our time here are fairly relaxing. On Friday evening we celebrated the conclusion of class with a nice dinner (a stew of pomegranates, pork, and vegetables) and vodka social time at the professor flat. I’d held off drinking much this trip for jet lag and other reasons. Vodka isn’t one to refresh your memory. Anne and I both felt a little rotten Saturday morning. 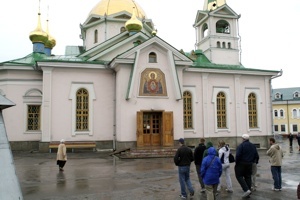 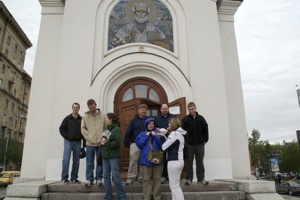 Regardless, we went to the city center of Novosibirsk Saturday afternoon. There, we traveled by way of subway, buses, and mini-buses (van.) We went to a regional history museum and a Russian art museum. We also visited the orthodox church here, and the chapel reconstructed at the geographic center of Russia (at least Imperial Russia when they possessed part of China, Poland, Ukraine, Serbia, and Finland.) While they do not occupy that land any longer, Novosibirsk is unwilling to give up their claim to the geographic center. After our five hours in town, I took a nap while Anne stitched and our housemates watched the French Open.

My sinuses are acting up and even this morning I am fatigued from them. Today is a short day with church at 11-ish and a short journey to Academgorodok for souvenirs. We will have an early evening as we are being picked up for our flight at 4:15 am tomorrow. Yeah rah. It will be nice to relax though a bit before flying and a whirlwind tour of the Kremlin on Monday.

We have dispelled many stereotypes on our trip.
1-Novosibirsk isn’t that bad, even in the winter. It is certainly not worse than southern Canada or the northern Great Lakes.
2-Siberia is a big place, but it’s wrong to say all Siberia is the same. Much of Siberia was settled between 1600-1700 but previously had been occupied by native people, much like the Inuit of Alaska. There are regional food and even some regional dialect.
3-On a similar note, all Russia is not the same. While communism sought to destroy any distinguishing character between the regions, they have persisted.
4-The people are grumpy continually. While their art is dark and gloomy, the people are quite friendly once they know you. They don’t feel obligated to smile or greet strangers as we do.
5-The Orthodox faith is not entirely mysterious or confusing. They hold higher value in liturgical art than most American denominations but are only slightly more decorative than the churches of Western Europe. We saw a baptism which was simple enough with words of promise and immersion. We didn’t have the opportunity to attend a mass. Perhaps we will at least hear some of the choral work in Moscow?
6-There are no bears or wolves roaming the streets. They have both, but the mosquitos and ticks are a bigger threat.

This will be our last post from Novosibirsk and perhaps Russia depending on internet in Moscow. I’m not much interested in going to McDonald’s just for free Wi-Fi.